Tokyo and Iwata, Japan, March 11, 2019 – Yamaha Motor Co., Ltd., and Fujitsu Limited today announced that they will conduct an IoT-based field trial to improve the performance of the 470 (Four-Seventy), a type of small dinghy used in sailing competitions. The trial will commence from March 13 through April 30, 2019, on Lake Hamana in Shizuoka Prefecture, Japan.

In this field trial, the companies will visualize information such as the dinghy’s inclination and speed, as well as the data on course, by attaching a number of sensors to various parts of the boat and analyzing the sensor data using Fujitsu’s cloud service. Based on those results, they will specify areas that need adjustment to improve the dinghy’s performance, which will be useful in enhancing both the sailing performance of the dinghy and the sailing skills of the crew. By repeating this process, in addition to the upgrading of the boat structure and the tuning of mast and sails, users will be able to grasp the impact of crew actions on boat speed, with the goal of guiding users to optimal tuning to deliver even higher performance.

The companies have designated a series of activities including this field trial as Project 470 Sailing Analysis, and they will be jointly promoting the initiative. Under this project, they will build a platform for developing boats with even greater sailing performance, contributing to the further progress of the marine market worldwide.

The 470 Class is a sailing competition centered on handling a small, two-person boat with a total length of 470 cm. The competition involves a race to a goal while circling buoys placed at sea, with a skipper handling both the helm and the mainsail while a second crewperson is responsible for adjusting the inclination of the boat and handling the jib. In Japan, 470s are often handled by university and company yacht clubs, and it is a class where many sailors around the world compete for top prizes in international races, including the World Championships. 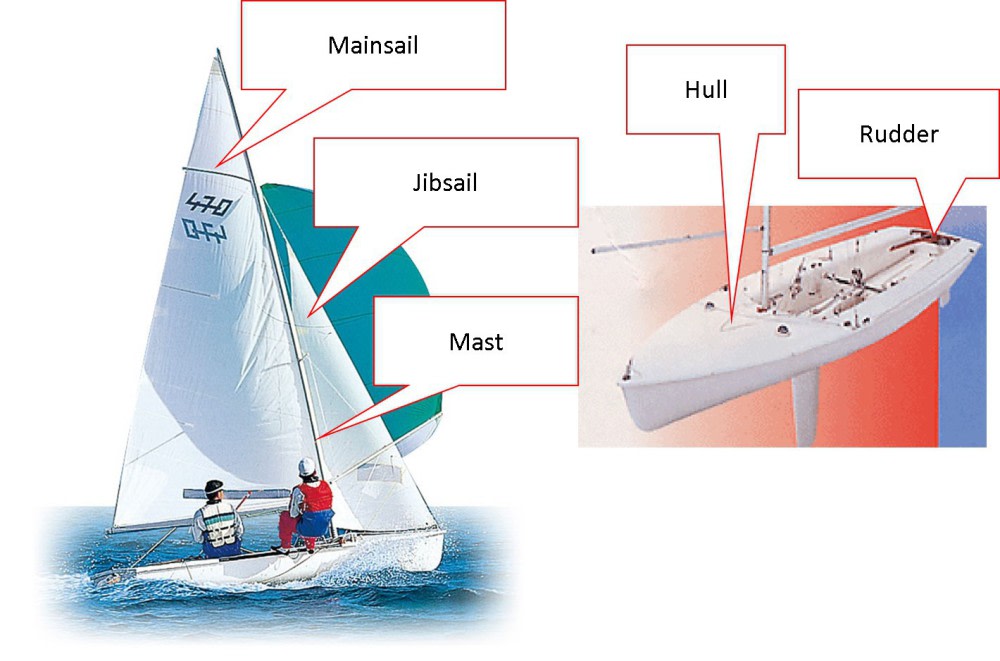 Because the established design and construction standards for 470 Class dinghies are very strict, there are challenges in improving sailing performance within the boundaries permitted by the standards. Accordingly, the tuning of various constituent elements, such as the hull, the sails, and the mast, has become the most important issue in the development of this class.

This field trial will reveal the impact of tuning and crew actions on sailing performance, aiming to optimize the process of tuning based on the physique of the crew as well as sea conditions while sailing, such as wind speed and waves.

1. A nine-axis sensor (including an accelerometer, a gyroscope, and a geomagnetic sensor) that can measure the orientation of the boat, developed by Fujitsu, and a GPS sensor that will measure the speed, position, and course of the boat will be attached to a 470 Class dinghy made by Yamaha Motor.
Fujitsu will collect data for analysis, while sailing, in its cloud service, thereby visualizing information such as the boat’s speed, course, and orientation.

3. Data from 1 and 2 above will be integrated, and based on analysis results displayed in an application, the combined data’s correlation with sailing performance will be analyzed for tunings and crew actions.

4. Roles of the Two Companies

Using the various types of sensor and the analysis results displayed in an application developed by Fujitsu, Yamaha Motor will repeatedly measure and tune the sailing performance of the dinghy. In addition, Yamaha Motor will use the insights and knowledge accumulated through this field trial to improve its boat development platform, contributing to further advancement in the marine market, beginning with investment in the 470 Class market.

Fujitsu will analyze the sensor data collected from the various sensors attached to the boat in its cloud, and visualize the speed, course, and orientation of the boat. Fujitsu will also develop an application for Yamaha Motor to display the analysis results of such data on PCs and smartphones in different formats including numbers, graphs, and maps. In this way, Fujitsu will support the development of Yamaha Motor’s 470 Class dinghies.

Overview of the field trial

Going forward, in addition to the behavior data of the boat itself, the two companies also plan to collect information such as data on the ways the crew move the sails and the movements of the crews’ bodies.
Moreover, Yamaha Motor aims to use the knowledge and insights gained from this field trial to further improve the sailing performance of a 470 Class dinghy.

Yamaha Motor (TOKYO: 7272) is a world-leading producer of motorcycles, marine products, power products and industrial machinery and robots. The company’s diverse business and wide variety of products are built around its proprietary technologies focused on small engines, chassis & hull and electronic control. Yamaha Motor conducts global development, production and marketing operations through 140 subsidiaries and equity-method affiliates in 30 countries. About 90% of consolidated net sales are generated in more than 200 countries outside of Japan. The company is steadily restructuring its global engineering, manufacturing and marketing capabilities for sustainable long-term growth. Please visit http://global.yamaha-motor.com.

Fujitsu is the leading Japanese information and communication technology (ICT) company, offering a full range of technology products, solutions, and services. Approximately 140,000 Fujitsu people support customers in more than 100 countries. We use our experience and the power of ICT to shape the future of society with our customers. Fujitsu Limited (TSE: 6702) reported consolidated revenues of 4.1 trillion yen (US $39 billion) for the fiscal year ended March 31, 2018. For more information, please see www.fujitsu.com.