At the end of this year, we mark the 70 years that have passed since the founding of Bruun Rasmussen Auctioneers with a large anniversary auction. One of the highlights of this auction is a unique Russian sapphire tiara – a historic cultural treasure, which exemplifies the strong connections between the Danish Royal House and the Russian Imperial House.

The story about “The Russian Sapphire Tiara” begins all the way back in the spring of 1898, where Princess Alexandrine of Mecklenburg-Schwerin married the Danish Prince Christian in Cannes. In 1912, they were proclaimed Queen Alexandrine and King Christian X of Denmark. At their wedding in 1898, one of their many presents was “The Russian Sapphire Tiara”, which is now up for auction. It was given to the future Queen of Denmark by Tsar Nikolai II and Tsaritsa Alexandra Feodorovna of Russia. The tiara was originally a so-called combination piece, where the different parts could be used individually. In 1933, the Danish royal couple passed on the jewellery to their daughter-in-law Hereditary Princess Caroline-Mathilde at her wedding to their youngest son Hereditary Prince Knud at the Fredensborg Palace Chapel. After the Hereditary Princess' death in 1995, the tiara was given to her son Count Christian of Rosenborg and his family, where it has been until today.

"As a boy, the jewellery of the ladies wasn’t exactly at the top of my mind. But my mother, Hereditary Princess Caroline-Mathilde, received the piece of jewellery as a wedding gift from my grandmother and grandfather (her in-laws, King Christian X and Queen Alexandrine), which was originally a gift from my grandmother and grandfather's relatives – Tsar Nikolai II and Tsaritsa Alexandra of Russia. It was a Russian piece of jewellery with sapphires and diamonds, which my mother used both as a necklace and as a bandeau, as can be seen in photographs from back then. At a later date, my mother had the jewellery changed to its present form, and I remember very well her wearing this Russian sapphire tiara," says His Excellency Ingolf Count of Rosenborg (brother of the now deceased Count Christian of Rosenborg)

Documenting the History of a Cultural Treasure

Bruun Rasmussen's chief specialist in Russian art, Martin Hans Borg, has long been aware of the tiara’s existence and was therefore excited about the news that Count Christian and Countess Anne-Dorte of Rosenborg's three daughters, Josephine, Camilla and Feodora of Rosenborg, had decided to put the tiara up for auction. The work of documenting the jewellery's provenance led Martin Hans Borg on an interesting journey through the history of the Danish Royal House. The wedding of Prince Christian and Princess Alexandrine in Cannes was, for instance, a subject of great interest to the Danish newspapers. In the morning edition of the newspaper Berlingske Tidende on 27 April 1898, Borg found a list of the couple’s gifts, which confirms that the jewellery was the wedding gift from Tsar Nikolai II and Tsaritsa Alexandra Feodorovna of Russia. Another piece of the puzzle was found at the Rossiyski Gosudarstvenniy Istoricheskiy Arhiv (RGIA, the Russian State Historic Archive) in the form of a bill that includes a similar description of a sapphire jewellery. At the same time, Martin Hans Borg has succeeded in uncovering old photographs of Queen Alexandrine where she is wearing her wedding gift in different combinations:

"One thing is certain – the jewellery’s journey alongside the members of the Danish Royal Family has been a long one, and a provenance does not get better than this. It is an absolutely outstanding piece of jewellery that, by virtue of its story, design and quality, is the most interesting Russian objet d’art that Bruun Rasmussen has ever had under the hammer throughout the 70 years of our history," says Bruun Rasmussen’s chief specialist in Russian art, Martin Hans Borg.

The auction will be held on Friday 30 November at 2 pm at Bruun Rasmussen Auctioneers at Bredgade 33 in Copenhagen. The preview will take place at the same address from 21-23 and 30 November. “The Russian Sapphire Tiara” will also be exhibited during Russian Art Week in London at the Shapiro Gallery from 24-26 November. 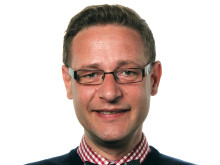 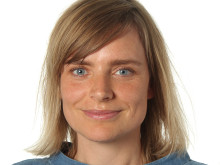 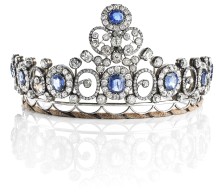 Friday afternoon, a historical treasure was up for auction at Bruun Rasmussen in Copenhagen. Queen Alexandrine's Russian sapphire tiara was sold for DKK 2 million (EUR 350,000 including buyer’s premium). 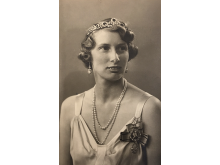 Hereditary Princess Caroline-Mathilde, who can here be seen using the combination piece as a bandeau in 1944. 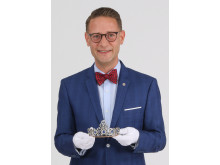 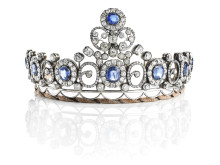