The Knotted Gun sculpture is established on the seafront, just around the corner from the old Holiday Inn building, a concrete tower block deeply scarred by shell and bullet holes from the 1975-90 civil war.

The symbol of Non-Violence is a universal symbol for peace and non-violence without any religious, political or cultural boundaries. It is the symbol of the Swiss based foundation The Non-Violence Project (NVPF) who has since 1993 educated over 8 million young people, teachers and sport coaches globally in how to solve conflicts peacefully through their education programs Schools for Peace and Sports for Peace.

The 2nd of October is also the start off point for a fruitful collaboration with the Academic University for Non-Violence and Human Rights (AUNOHR). Through their pioneering work, the founders of the AUNOHR, Ms. Ogarit Younan and Mr. Walid Slaiby, succeeded in establishing a national day of non-violence in Lebanon, thus institutionalizing the culture of non-violence and human rights through the creation of this unique university in the world.

"This inauguration means a lot to us and we are proud to have succeeded in putting this sculpture in place here, which symbolizes so many things for us. We have been struggling for so long to reduce violence in the region and this new collaboration with the NVPF is very important to us" explains Ogarit Younan, founder of the AUNOHR.

"Beirut is the first Arab city to inaugurate this statement for peace and non-violence. It is indeed impossible to imagine a more emblematic place, Beirut, that has been the scene of so much violence in recent decades. We look forward to sharing our experiences and everything we have with the AUNOHR, in order to continue our struggle together towards the only possible way, that of peace and non-violence. "says Blaise Oberson, CEO, NVPF.

The celebration was a cultural commemoration, under the patronage of the Prime Minister Mr. Saad Hariri who was represented by the Minister of Culture Mr. Ghattas Khoury, with the participation of Arund Gandhi (Mahatma Gandhi's grandson) and official peace figures, ambassadors, artists, intellectuals, media, academics, civil society, international organizations, youth and students from all the country. It was an event broadcasted live on the main Lebanese TV channel (LBCI), and supported by BDL, UNICEF, LACR, NVPF, individuals and many contributions in kind.

The Non-Violence Project Foundation (NVPF) is a Swiss non-profit foundation founded in 1993 and based in Geneva. Its mission is to help build a better world by delivering education to young people around the world and to enable them to learn how to act and take responsibility in all situations of conflicts and violence. NVPF has educated more than 8 million young people, teachers, and sports coaches on 5 continents, with a goal of reaching 50 million by the year 2025. www.nonviolence.com

Prior to publication, it must be approved by The Non-Violence Project Foundation .

250 schools, 2500 teachers, 25 000 students with a total of 250 000 people in communities will be engaged in The Non-Violence Project Foundation (NVPF)'s educational project in Uganda, thanks to the financial support from the City and the Canton of Geneva in Switzerland.

The Non-Violence Project Foundation (NVPF), based in Geneva, opens office in India.

The Non-Violence Project Foundation has just officially launched the NVP India office in the presence of local authorities. India is the 31st country in which NVPF is active. Birenda Kumar, the local director, is now now starting to implement the NVP educational programs in schools around the country. The objective is to educate 3 million young people by the year 2025.

The World Masters Games 2021 Kansai Organising Committee (hereinafter referred to as "WMG 2021") and the Non-Violence Project Foundation (NVPF), have signed a Memorandum of Understanding to cooperate during the 2021 Master Games in Kansai, Japan.

New Global Non-Violence Ambassador Johan Ernst Nilson and his knotted gun sculpture One World - to unite the world in peace.

The City of Belfast has been warmly welcomed into an illustrious group of locations around the world that have embraced The Knotted Gun sculpture and its supporting organisation, the Non-Violence Project Foundation (NVPF).

The Non-Violence Project Foundation (NVPF) trained over 23,000 people in 2019 to prevent and reduce violence

The Non-Violence Project Foundation (NVPF), whose mission is to prevent and reduce violence around the world, has today released its 2019 Evaluation Report outlining the foundation’s contribution to the global effort to stem violence across the globe. In 2019, NVPF trained 23,778 students, 1,587 teachers/trainers and 7,500 volunteers, on four continents.

Non-violence project to help thousands of school students in Uganda

More than 25,000 pupils are to benefit from a new project to combat violence in schools in eastern Uganda The Non-Violence Project Foundation’s (NVPF) education project was launched this month with the aim of stopping youth violence in the country and more students being murdered in schools. Article by Billy Briggs for Their World, April 05 2018 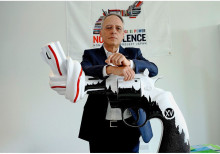 "Geneva has a role to play in promoting non-violence" 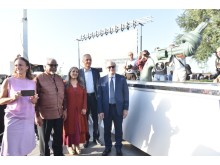 The Knotted Gun sculpture is established on the seafront, just around the corner from the old Holiday Inn building, a concrete tower bloc... 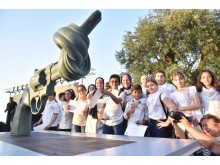 The unveiling of the knot...

On the occasion of October 2, The International Day of Non‐Violence, the Academic University for Non-Violence and Human Rights – AUNOHR l... 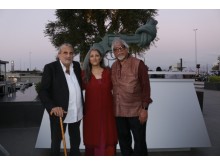