“We are extremely pleased that the season is about to start as it is a true sign of spring. Thanks to many years of marketing together with Göteborg & Co we have succeeded in putting Gothenburg firmly on the map among the cruise lines,” said Jill Söderwall, Vice President Cruise at Gothenburg Port Authority.

One of the high points of the season will be the visit by Norwegian Getaway. With 4,000 guests, she will in passenger terms be the largest cruise ship ever to visit the Port of Gothenburg. Other ships that will attract particular attention include the new Mein Schiff 6, which is currently being built and is due to be launched in Hamburg in May.

A total of 44 cruise ships, carrying 60,000 passengers, are scheduled to visit Gothenburg this year compared with 34 last year.

Trendy port city
Prominent international travel guides rank Gothenburg highly and describe it as a trendy, vibrant port city with a multitude of things to see and do.

“There’s a great deal of scope to increase cruise tourism in Gothenburg. We have noticed that the average age of the cruise tourists who visit the city is falling and they want to make their own way around, not just in the city but also in the nearby countryside. Gothenburg is ideal in terms of size to fit in both during a visit,” said Petra Gamerdinger, Cruise Manager at Göteborg & Co.

The visitors come mainly from Germany, the United Kingdom, the USA and Italy. On average, each cruise tourist spends 700 kronor per person on food, shopping and excursions during their visit. This year cruise tourism is expected to generate revenue of almost 42 million kronor in the tourism sector.

The cruise season will end on October 9. After that there will be two Christmas calls in December.

Final year at Frihamnen
2017 will be the final year for cruise ships at Frihamnen. The area will be part of a major urban development scheme with the construction of homes and offices, forcing the present cruise terminal to find a new location.

The location is perfect for cruise tourism as it is within easy walking distance of the cosy, inviting districts of Majorna, Linné and Haga, and just a short journey by public transport or chartered bus into the city centre. Cruise tourists can look forward to a first-rate reception when the beautiful and historic Amerikaskjulet comes back to life as a passenger terminal,” said Jill Söderwall.

Newest: Mein Schiff 6, currently being built and due to be launched in Hamburg in May, 293 metres long, 2,500 passengers

List of all the cruise ships that are due to call at the port in 2017.

Cruise tourism in Gothenburg Gothenburg Port Authority and Göteborg & Co have been working actively since 2008 to market Gothenburg as a cruise destination. The number of cruise ships has increased significantly with a record high in 2014 when 73 ships visited the port, bringing more than 100,000 guests into the city. There has been a slight downturn since then, due largely to keen competition from other ports, particularly in Denmark. 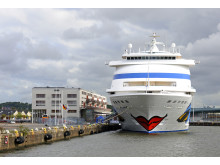 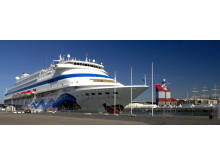 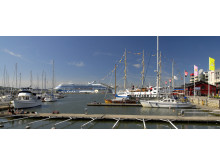 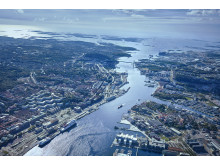 The Port of Gothenburg fr...