Expenditure was up +0.9% year-on-year in December, following a fall of -1.9% in November. Moreover, the expansion was the first in four months. Although modest, the increase was the sharpest since last April.

Despite the rise in spending in December, trends in expenditure remained subdued during the final quarter of 2019 as a whole. Consumer spending was down -0.7% year-on-year, broadly in line with the falls seen in both the second and third quarters of the year.

eCommerce spending was the leading factor behind the increase in consumer spending, due to Cyber Monday occurring in December 2019. Online expenditure was up +6.8% during December, compared to the same period the previous year, the strongest rise since January 2019.

Face-to-Face spending, meanwhile, continued to decline, extending the current sequence of decline to four months. At -1.4% year-on-year, the decrease was modest but sharper than seen in November.

Spending increases were seen in the majority of sectors covered during December, led by Hotels, Restaurants & Bars (+4.5%). Solid rises were also recorded in the Transport & Communication (+3.4%), Recreation & Culture (+3.3%) and Clothing & Footwear categories (+2.9%). In the case of the latter, the expansion ended an eight-month sequence of decline.

Philip Konopik, Ireland Country Manager, Visa said: “Irish consumer spending was subdued in 2019 in comparison to previous years. This reflects that the majority of gains from the economic recovery have arrived and the same levels of increases in household spending that we have seen in recent years cannot be expected. While spending may have plateaued somewhat in December, it comes as no surprise that sectors like Hotels, Restaurants & Bars and Recreation & Culture saw boosts as the public celebrated Christmas with meals and nights out over the holiday period.”

Andrew Harker, Associate Director at IHS Markit said: “A successful December ensured that Irish consumer spending ended 2019 on a positive note. A strong rebound in eCommerce expenditure drove the increase in overall spend, helped by the fact that Cyber Monday occurred at the start of December in 2019. Data suggest that conditions on the high street remain challenging, however. Retailers will be hoping that 2020 brings more stability on the political front, helping to solidify consumer confidence and keep households spending.” 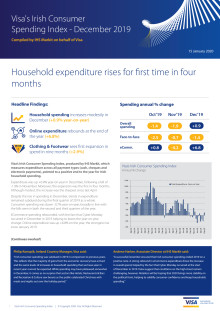 Visa’s Irish Consumer Spending Index, produced by IHS Markit, which measures expenditure across all payment types (cash, cheques and electronic payments), pointed to a positive end to the year for Irish household spending.