Dublin, August 14 2019: Visa’s Irish Consumer Spending Index, produced by IHS Markit, which measures expenditure across all payment types (cash, cheques and electronic payments), signalled an ongoing reduction in household expenditure in July. Spending was down -0.3% year-on-year, the third successive decline. That said, the latest fall was only marginal, slowing from the -2.6% decrease seen in June to the weakest in the current sequence of falling spend.

ECommerce spending showed a return to growth at the start of the third quarter, following a marginal reduction in the previous month. Expenditure was up +2.5% year-on-year, the fastest rise in four months but still one that was much weaker than the average since the series began in September 2014.

Face-to-Face spending remained the main source of weakness in July, posting a reduction in expenditure for the third month running. Mirroring the overall picture, however, the decline of -1.6% year-on-year was the weakest in the current period of decline.

Sector data suggested that the overall reduction in spending was centred on three categories, namely Food & Drink (-1.3%), Clothing & Footwear (-4.6 %) and Miscellaneous Goods & Services (-4.9%). In each case, however, rates of contraction eased from those seen in June. Clothing & Footwear has now seen spending decrease on an annual basis in 12 of the past 13 months.

The five remaining sectors all posted growth of expenditure in July, led by Household Goods where the rate of expansion rebounded to a three-month high of +6.3% year-on-year. Recreation & Culture (+2.7%) also saw growth pick-up, while Hotels, Restaurants & Bars registered a slight slowdown (+2.0%). Returns to growth were seen in the Transport & Communication (+1.6%) and Health & Education (+3.4%) categories.

“The latest Irish CSI figures are an improvement on June, however, there remains a continued lack of growth in household expenditure at the start of the third quarter of 2019. The return to growth of eCommerce in July, up 2.5% year-on-year following a -0.5% decline last month, was not enough to turn the tide, with overall spending down -0.3% year-on-year. Looking at the sectoral data, Clothing & Footwear continues to struggle with spend declining -4.6% year-on-year, but some bright spots remain with Household Goods, Recreation & Culture and Hotels, Restaurants & Bars continuing to show uplifts in spend year-on-year.”

“Although improving from the worrying picture seen in June, a third successive decline in consumer spending in July extends the generally weak trends seen in recent months. The high street continues to struggle, with Clothing & Footwear remaining under pressure. While labour market conditions remain supportive, other areas such as consumer confidence, retail sales and business activity chime with the challenging environment highlighted by the CSI as the prospect of a ‘no-deal’ Brexit seems to become more likely.” 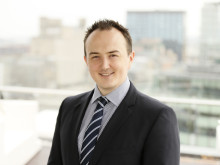 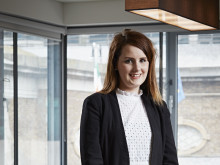 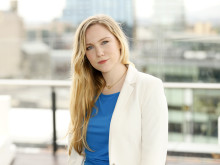 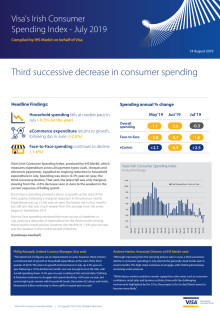