​#BRAINSTORM will light up Bjørvika in Oslo

It’s here at last. The artwork BRAINSTORM by Lars Ø Ramberg has taken three years to produce. The result is a gigantic piece of conceptual art, comprising over 400 metres of handmade glass tubing in yellow and white. Europe’s largest neon artwork is the first thing you see when you enter Oslo’s new main public library, Deichman Bjørvika.

BRAINSTORM – with the working title From Daring to Sharing – has been specially designed for Deichman Bjørvika, and refers to the evolution of public libraries from their origins in the Age of Enlightenment to today’s modern, multi-purpose space that is open to all. 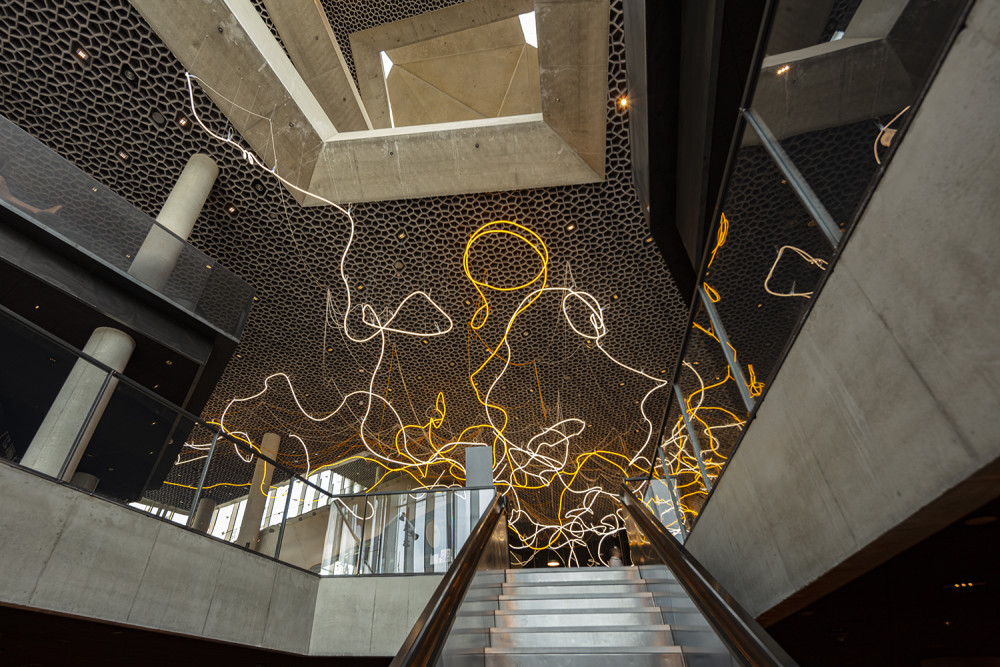 The artwork references Immanuel Kant’s philosophical essay Was ist Aufklärung? (What is Enlightenment?) from 1784. Ramberg asks the same question as Kant, but in a modern context. What is enlightenment today? Kant himself quoted the Roman poet Horace: Sapere aude (Dare to know).

The artwork answers the question in the form of a spectacular network of glowing, handmade neon tubes, 400 metres long and extending between floor and ceiling in an organised chaos.

BRAINSTORM visualises connections, between people, between thoughts, between places and between cultures, in a vast and chaotic web – like a sort of information cloud. The piece is an energetic network of brightly lit glass neon tubes. 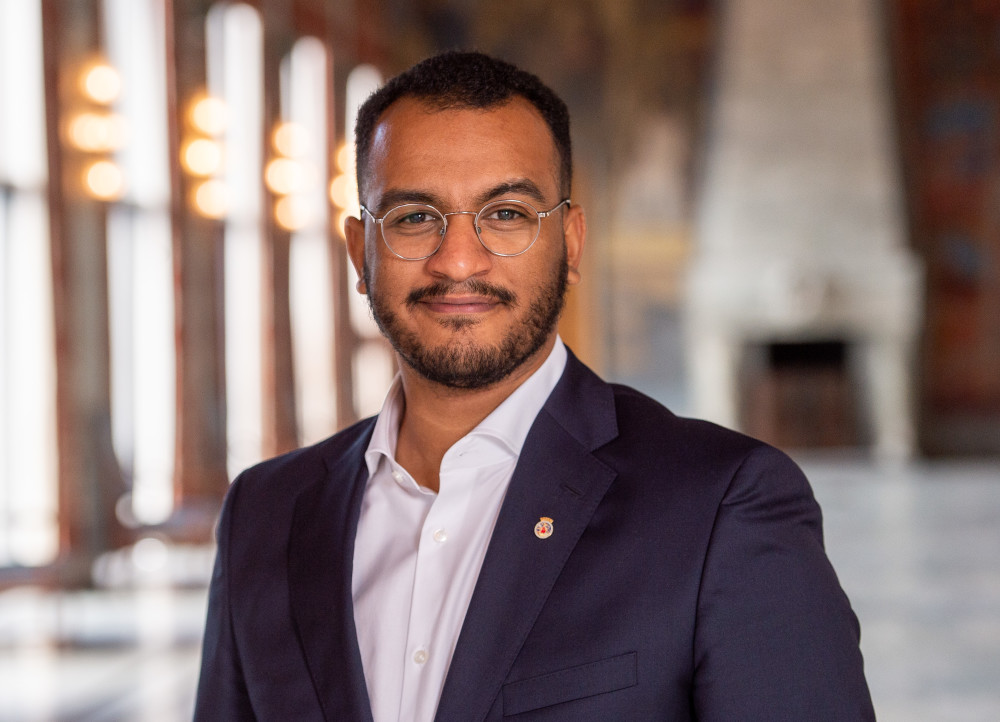 - We are now opening Oslo’s immense new meeting place, where people from all over the city can come and feel at home. It is therefore wonderful that we have also been able to install this inspiring work of art, which can brighten the day for everyone who uses the library. We use the library to become enlightened people in all kinds of ways, and it is important that the city’s residents are able to experience art at close quarters. I am delighted that we have added such a fine work to the art collection which everyone who lives in Oslo owns a share of,” says Omar Samy Gamal, the City of Oslo’s Vice Mayor for Culture and Sport.

The inspiration for BRAINSTORM came when Ramberg was trying to understand what a public library actually is – a knowledge space. He investigated the origins and history of the European Age of Enlightenment, which was at its height when Carl Deichman bequeathed his personal collection of around 6,000 books, as well as a number of other items, for public use in Oslo.

The word enlightenment is a metaphor for intelligence.

- The work is intended to give the public a fascinating experience. Light and enlightenment hang together both physically and metaphorically as a sign of intellectual and spiritual wakefulness. In addition, today’s internet is facilitated by the transmission of light signals along fibre optic cables. This artwork shows the historical Age of Enlightenment and today’s use of light cables as a means of communication between sender and receiver in our digital age of enlightenment, - says Lars Ø. Ramberg, the artist behind BRAINSTORM.

BRAINSTORM joins the city’s own art collection on 18 June 2020. It will be on permanent display at the new main library, Deichman Bjørvika. BRAINSTORM’s creation has been made possible by the City of Oslo’s arts funding scheme, in collaboration with Public Art Norway (KORO).

Every year, 0.5 per cent of Oslo’s investment budget is allocated to public art via a municipal arts funding scheme – an extremely ambitious arrangement that the city can be proud of. The works in the collection have been acquired through direct commissions to artists or art competitions, through gifts or purchases. 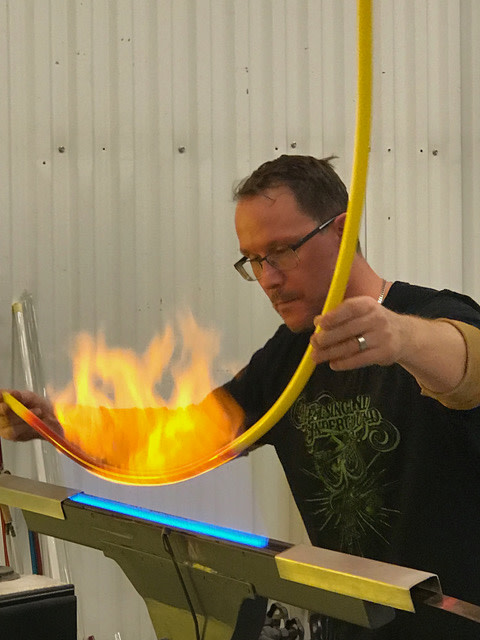 Neon, one of a number of noble gases, is a volatile substance. The same can also be said of molten glass. Creating 400 metres of glass tubing, filling it with neon gas and attaching electrodes to it is a craft that takes at least eight years to learn. That is why few people work in this field today.

- All the pieces that have gone into the artwork are handmade and difficult to work with. Each tube is heated to melting point and mouth-blown to the shape I have created in the model, says Lars Ø. Ramberg.

The first glass tube neon light was produced in Paris in 1911. The method was licensed for commercial use, and when the patent expired in 1961, artists embraced the technique. Lucio Fontana, Mario Merz, Joseph Kosuth, Francois Morellet, Dan Flavin, Bruce Naumann, James Turell and Tracey Emin are among the many artists who have made working with neon a central element in their artistic expression.

At Deichman Bjørvika, the 400 metres of neon tubing are suspended from the ceiling on thin metal wires, along with a tangle of high-voltage cables that form part of the artwork’s abstract design. A total of 1,800 metres of cable disappear up through the ceiling and meet on the floor above in a separate room, where they are supplied with electricity from 75 high-voltage transformers. The transformers turn 220 volt alternating current into 8,000 volt direct current. The voltage strips electrons from the neon atoms causing some of them to gain enough energy to become excited. When that energy is released, photons are emitted and the gas begins to glow.

The artwork was manufactured by Signex AS, while the neon tubes were produced by Nordiska Neon & Diod AB.

Lars Ø Ramberg is an internationally acclaimed visual artist, who lives and works in Berlin and Oslo. He studied at the Norwegian National Academy of Fine Arts in Oslo, and has had his main professional base in Berlin since he became Artist in Residence at Künstlerhaus Bethanien in 1998.

Ramberg is known for his place-specific installations, which actively examine and participate in the public space. His works create public debate and new understanding.

Ramberg represented Norway at the 27th São Paulo Art Biennial in 2006 with the work We intended to sing the love of danger, the habit of energy and fearlessness, and the 52nd Venice Biennale in 2007 with his work Liberté, Egalité, Fraternité. At the Museo Tamayo Arte Contemporáneo in Mexico City, he represented new German art with his film Empire State Building II, and for the exhibition Building Berlin in Kitchner, Canada, he developed the work Ich verstene nur Bahnhof. At the Hamburger Bahnhof museum in Berlin, he realised the project FREMDGEHEN, about the ‘German girls’ (Norwegian women who had had relationships with members of the German occupying forces) who were deported from Norway after the end of World War II.

Ramberg’s most famous work is PALAST DES ZWEIFELS (PALACE OF DOUBT). After six years of intensive research and preparation, he persuaded the Bundestag, Germany’s federal parliament, to take over the abandoned Palace of the Republic from the days of the GDR, and convert it into a Gesamtkunstverk. From its roof, the word ZWEIFEL, made of aluminium and 900 metres of neon tubing, measuring 42 x 8 metre, dominated the sky above Berlin for six months. Ramberg had brought the debate about demolition and the debate about reunification into sharp relief and highlighted this iconic monument to collective doubt.

- Doubt is proof of democracy and a sign of the 21st century’s intelligence, -  says Ramberg.

- To resolve the challenges we face in a globalised world, we must redefine intelligence. While the 20th century celebrated geniuses like Einstein or Openheimer, our century demands a more multi-faceted and collective intelligence. BRAINSTORM is a way of developing new intelligence TOGETHER.

The Agency for Cultural Affairs (Kulturetaten) ensures quality, diversity and development in cultural offerings in Oslo. The Agency also recommends candidates for grants and scholarships for various projects aiming to promote art, culture and media in the city. The Agency is also responsible for the City of Oslo’s art programme, the City Archives, Oslo Culture School, the Pop Centre, the Vigeland Museum, the sculptures in the Vigeland Park, Oslo Culture Night, Oslo biennalen, summer camps, cultural properties, the Events Office (arrangementskontoret), and more.

Stein Slyngstad has been director since 2018.

Deichman Bjørvika opens finally on 18 June 2020. Designed by Atelier Oslo and Lundhagem, Oslo’s new main public library enjoys a stunning location, right by the opera on the waterfront. Here you will find a new artworks outside by the american artist, Martin Puryear. Unveiling on 15 june at 10:30 am.

This is the mutual press room for the three cultural agencies in the City of Oslo: The Agency for Cultural Affairs (Kulturetaten), Oslo Public Library Deichman and Munchmuseet.

Culture Oslo
Visit our other newsrooms