”I think even now Adam in Paradise is a painting that can still challenge our conceptions of taste and conventions. At the time, the painting was regarded as unacceptable by society, in part because of the flamboyant colours and the nudity but perhaps even more so because the artist painted the model with a bored expression instead of letting him play the role of biblical Adam with passion. It is very obvious that he is a potential object for the viewer’s lust, rather than being part of a moral story. The painting can therefore be regarded as one the boldest works of Danish art from that time and also the most interesting, not least from a queer perspective,” says Carl-Johan Olsson, curator 19th century art at Nationalmuseum.

In many ways, Zahrtmann is an oddity in the history of art. He became successful as a painter of history but he went his own way early on by frequently choosing to paint historically prominent women in scenes that were modified in different ways – often with humour and a touch of decadence. During the 1880s, he became an important person on Denmark’s art scene as a teacher at Kunstnernes Frie Studieskoler which was an alternative to Kunstakademiet. He continued in that role into the 20th century and thereby was of great significance for the development of modern art in Denmark.

Of late, Zahrtmann has been very much in focus because of his free views regarding gender roles and sexuality and how they are reflected in his art. An exhibition with this theme is currently on tour in Denmark, visiting Ribe Kunstmuseum, Fuglsang Kunstmuseum and Den Hitschsprungske Samling.

Nationalmuseum receives no state funds with which to acquire design, applied art and artwork; instead the collections are enriched through donations and gifts from private foundations and trusts. The acquisition has been made possible by a donation from Nationalmusei Vänner. 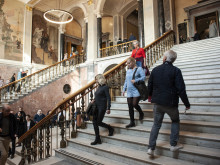 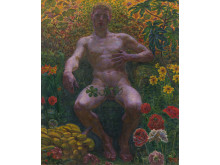