Munich, August 2018: More and more people are choosing pedal power to get from A to B in the urban environment – and bike sharing enables them to do so quickly, cheaply and conveniently. The dynamic pace of growth in this field has done much more than merely bring the big Asian bike sharing providers into the arena – it has triggered a veritable race to control the market. European players increasingly find themselves competing in their home markets with financially strong and globally operating rivals. What they are fighting for is a slice of an attractive future market: A recent Roland Berger study concluded that global revenues from bike sharing are set to rise some 20 percent annually and could reach as much as EUR 8 billion by 2021 (Download study here). 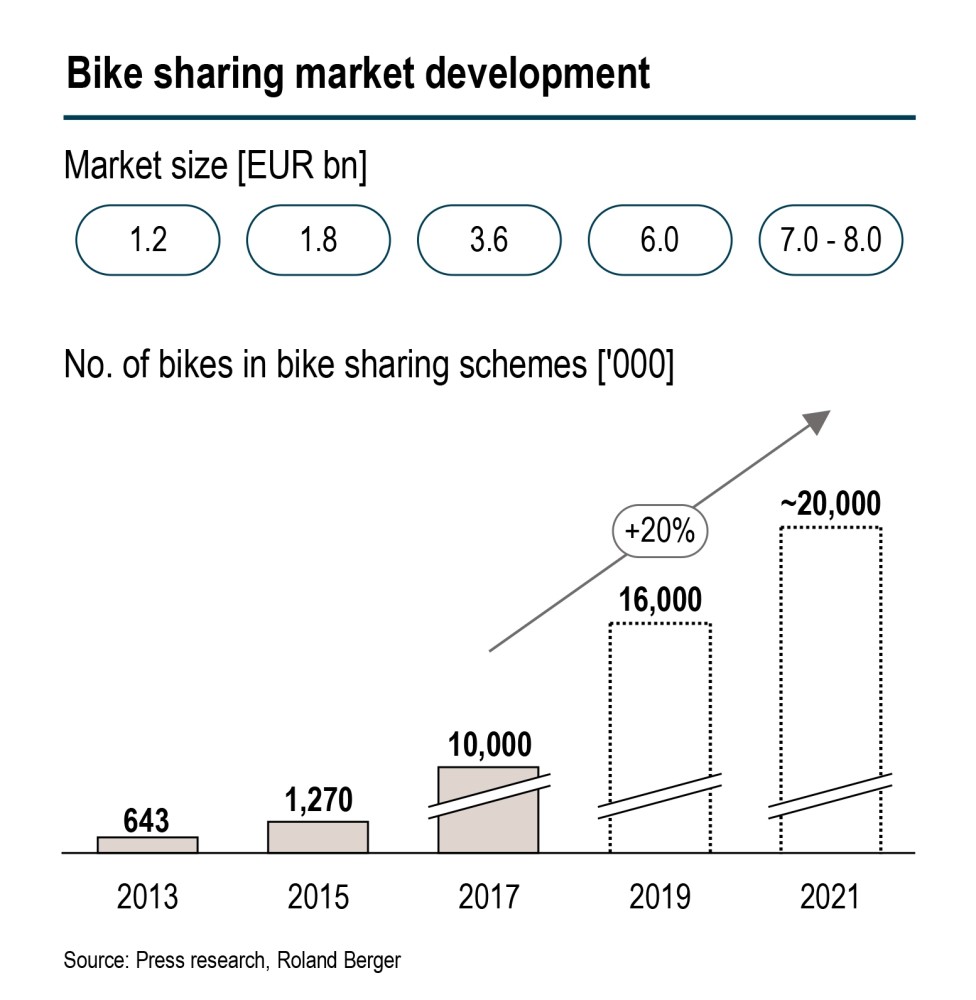 "Bike sharing is a low-cost and environmentally friendly means of transport and an ideal way of traveling short distances through cities – so it's no surprise we are seeing a boom in bike sharing in the world's congested metropolitan centers," said Roland Berger expert Alexander Dyskin. With 2.3 million, 1.7 million and almost 900,000 bicycles on the roads in Beijing, Shanghai and Shenzhen respectively, these cities are way out in front in the global rankings, followed by European capitals London (18,000), Paris (15,000) and Berlin (14,000).

The scale of the development is spurred by the intense and persistent demand for low-cost mobility and the massive investments going into the segment: In the recent past, private companies have consumed over USD 3 billion in venture capital in their quest to expand not only in China but worldwide. Particularly the Asian market leaders, who – unlike their European peers – operate free-floating systems where bikes can be dropped off anywhere, have been increasingly penetrating the European market since 2017. Local providers find themselves under growing pressure as a result.

There is also a negative side to the rapid pace of growth. Many bike sharing operators have faced unexpected losses after experiencing targeted vandalism of their bicycles. Others have had to beat a hasty retreat because of oversupply in certain cities. "With some providers disappearing off the scene owing to financial difficulties, it is clear just how tense the atmosphere on the market is," commented Schönberg. He expects the market to consolidate in the upcoming years, leaving just a few offerings available in each location – but what's left will be of high quality.

When it comes to the different systems around, the study forecasts further growth in the proportion of free-floating schemes in use. These do not require fixed bike stations or docks and users can access a bike anywhere through a simple app. Ever-growing numbers of providers are fitting their bikes with tracking devices to prevent theft and vandalism becoming a problem within these types of systems.

The study demonstrates that the bike sharing market is benefiting from the increase in people's environmental awareness globally coupled with the rise of the sharing economy. Growing numbers of users are happier to pay for mobility as a service than to own their own means of getting around. And riding a bike is cheaper than taking a taxi or using a ride-sharing service and is also more flexible than using a car, which requires more space for parking, or taking public transit, which only travels along predefined routes. Because it is easy to combine borrowing a bike with using other means of transportation as well, bike sharing occupies an important interface in a growing ecosystem spanning a range of different offerings and numerous mobility services. Users can take the train for the bulk of their journey and ride the last couple of miles on a bike, gliding past the traffic jams on the city streets. And will ideally be able to book all segments of the journey in advance through a single app.

"Players that want to survive in this fiercely contested market will need to offer a dense network and user-friendly access options – customers need to have everything from information to payment possibilities available on their smartphone, whatever service they are booking," said Tobias Schönberg, summarizing the direction in which the market is going. "Offering interconnectivity with other means of transportation is more important than ever for bike sharing providers."