Testing of the hull on the upcoming Service Operation Vessel for MHI Vestas has demonstrated optimal drag.

When ESVAGT starts working for MHI Vestas Offshore Wind in the Nobelwind offshore wind farm in 2017, it will be with a vessel with an optimised hull design.

The vessel design has been tested in Trondheim, where a model of the hull has shown promising performance in the model testing tank.

“During the test, the model is pulled through a basin approx. 250 metre long. Drag is measured so that the hull design can be optimised,” says Kristian Ole Jakobsen, Chief Operating Officer for ESVAGT:

“The results are very promising indeed: At the ten knots, which will be the vessel’s typical working speed, the design has performed among the best of similar models that we have tested before. This will have a significant impact on fuel consumption,” he says. 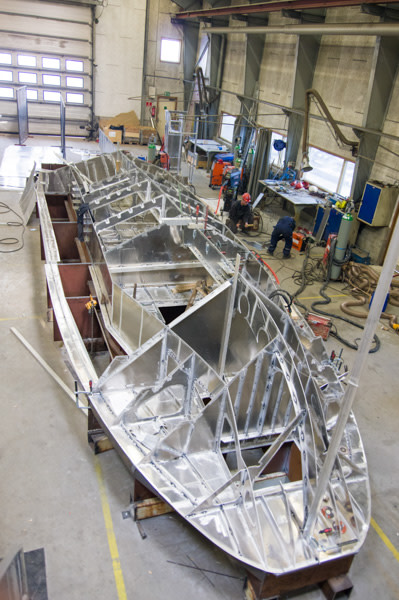 Havyard Ship Technology in Norway is in charge of designing the vessel, which will be built at the Cemre Shipyard in Turkey and enter into charter in the second half of 2017.

It will be equipped with two ESVAGT STB 7s (Safe Transfer Boats) and a larger, enclosed boat, a STB 12. The latter is currently being built at the Esbjerg Shipyard, also to the latest design.

ESVAGT has signed a ten year contract with MHI Vestas Offshore Wind for the Nobelwind project.

ESVAGT’s requirements and wish list for the new crew change vessel looked like a ’Mission Impossible’- but was not.

After careful consideration, ESVAGT has now ordered the next crew change vessel – and set the shipyard a hard task.