The train will depart London at 11:03 and is due to arrive at Leeds at 13:16 before returning south for the inaugural Leeds to London King’s Cross service departing at 13:45.

The Azuma train will be the first of 65 new trains to replace the existing fleet of 45 trains operated by LNER on the East Coast route which connects destinations in Scotland, North East England, Yorkshire, the East Midlands and London. 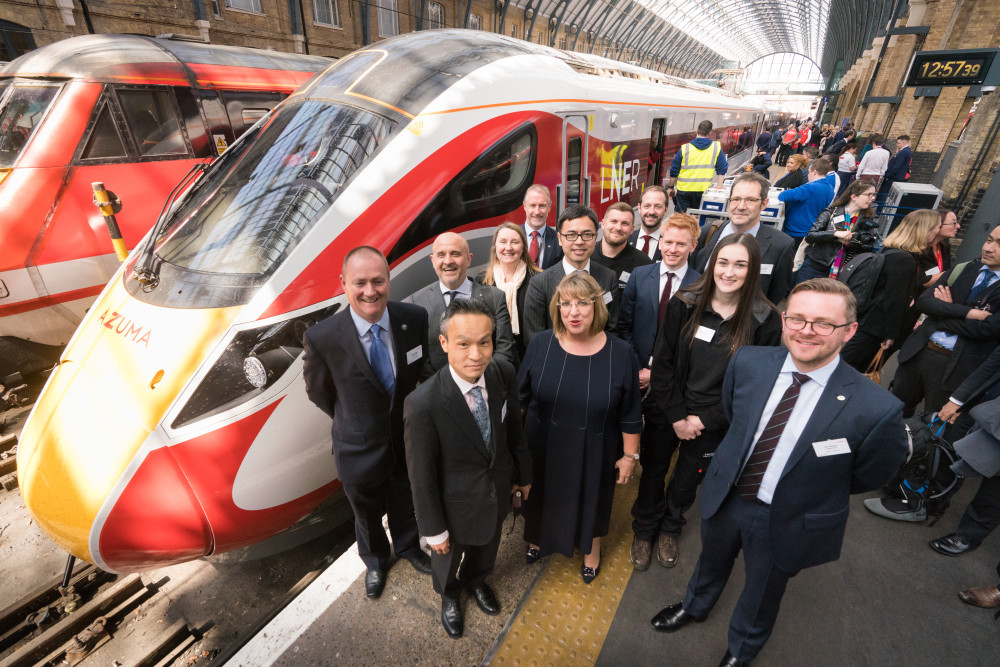 David Horne, Managing Director of LNER, said: “The launch of the first Azuma trains is a truly momentous event for LNER and the communities that we serve.

“Setting new benchmarks in rail travel is part of our DNA, and the new Azuma trains are the next big step for LNER in making the customer experience the best that it can be. They will transform travel with improved reliability, greater levels of comfort and an average of 100 more seats on every train compared to the current fleet.

“From extra leg-room and improved WiFi to being more environmentally friendly and accessible to more people, the Azuma experience is a real revolution in rail travel.”

First Class also includes larger tables, reclining seats and both USB and plug sockets at every seat. The seats have been designed to maximise comfort and support posture. A new traffic light seat reservation system alongside clear digital displays above seats in First and Standard Class will make it easy for customers to find reserved or available seats on-board.

The new Azuma trains are part of the Government’s £5.7billion Intercity Express Programme which will modernise LNER services on the key intercity route used by more than 22 million people each year.

Rt. Hon. Chris Grayling MP, Secretary of State for Transport, said: “The arrival of the state-of-the-art Azuma trains along the East Coast is the next step in one of the biggest transformations on the UK’s railway, in which we are spending a record £48billion to modernise our rail network.

“It underlines significant investment by both government and train operators as part of a joint commitment to introduce a host of modern, spacious and comfortable new fleets right across the country. We are proud that the Azumas have been built in the UK, supporting our supply chain and creating hundreds of skilled jobs.

“Millions of passengers will now start to reap the benefits from these state-of-the-art trains, which will deliver more seats on more services along the East Coast route.”

Karen Boswell OBE, Managing Director at Hitachi Rail, said: “Hitachi-built Azumas will truly transform the passenger experience on the East Coast mainline, offering extra seats, greater reliability and more journeys. As Britain’s new Intercity train of choice, Hitachi’s bi-mode and electric fleets, built in the North East and maintained by our own service teams, have created thousands of jobs and a supply chain that will support a generation to come.

“Azuma may look like a Japanese-bullet train, but underneath it is very British, with over 70 per cent of parts sourced from the surrounding areas of our factory.”

From Thursday 16 May, Hull will be the first destination to have an entirely Azuma operated service. Azuma will replace LNER’s daily HST service at 07:00 with the return train from London King’s Cross at 17:18 also being provided by an Azuma.

As part of the introduction of Azuma trains, there will be more services from later this year connecting Harrogate and Lincoln to London. With a new timetable from December 2021, more regular journeys between London and Edinburgh will take just four hours, and regular journeys between London and Leeds in two hours will become typical throughout the day.

£780million has also been invested across the East Coast route to modernise the hundreds of miles of infrastructure and improve platforms to support the roll-out of the trains. Further upgrade works to tracks at London King’s Cross will enable the faster, more frequent journeys the Azuma fleet can achieve.

Rob McIntosh, Route Managing Director for Network Rail, said: “We’re absolutely delighted that passengers are now able to travel on the new Azuma trains and we look forward to them reaping the benefits.

“The new trains are a very visible part of the massive investment the rail industry is making to allow more and faster journeys for passengers on the East Coast Main Line. Bringing Azuma into service has been a real team effort between our engineers and the teams at LNER and Hitachi and we continue to work together so that passengers in the north east and Scotland can enjoy them as soon as possible.”

The environmental benefits of the new trains are transformational. The Azuma will run using overhead electric wires for most routes. However, even when running under diesel power, the train’s modern engines will cut harmful emissions by 90 per cent compared to existing High Speed Trains (HSTs). Thanks to Azuma technology, communities and stations across the route will benefit from cleaner air and substantially quieter trains.

The on-board environment is a significant improvement for all customers including those who require wheelchair spaces, Priority Seats, Universally Accessible Toilets, clearer exterior and interior passenger information screens and audio announcements.

LNER teams have undertaken months of training and development to ensure customers can continue to enjoy the high standards of service expected from the operator. LNER achieved 87 per cent in the independent Autumn 2018 National Rail Passenger Survey, one of the highest scores for long-distance UK train companies.

The launch of Azuma on Wednesday 15 May can be followed on the LNER Twitter feed by following @LNER or searching the #Azuma hashtag.

About Hitachi Rail: Hitachi Rail is a fully integrated, global provider of rail solutions across rolling stock, signalling, service & maintenance, digital technology and turnkey solutions. With a presence in 38 countries across six continents and over 12,000 employees, our mission is to contribute to society through the continuous development of superior rail transport solutions. We are proud of our global achievements, from our world ­famous ‘bullet trains’, to our signalling solutions and turnkey projects, state­-of-the-art traffic management and digital solutions. Drawing on the wider Hitachi Group’s market-leading technology and research-and-development capabilities, we strive for industry leading innovations and solutions that can deliver value for customers and sustainable railway systems that benefit wider society. For information about Hitachi Rail, visit www.hitachirail.com.