A rare, old vintage wine from the beginning of the 18th century, which was salvaged from a shipwreck off the Dutch coast, can now be yours. It is also the oldest wine Bruun Rasmussen has ever had up for auction.

Right now, you can bid on a very special and very old bottle of wine, which adds quite a lot of depth to the concept of “vintage wine”. The wine dates back to the early 18th century and is the oldest Bruun Rasmussen has ever had up for auction. It is very rare that wines of this age are available for private purchase, and today only a handful of this type of wine is known to be in private ownership. The wine also comes with a backstory a little beyond the usual.

Only a Few Unbroken Bottles After the Shipwreck

In 1735, the wine was on board the Dutch merchant ship the "Vliegend Hert" (The Flying Hart) heading towards Jakarta in Indonesia. But four hours after the departure from the Netherlands, the ship struck ground and sank. All 256 crew members went down with the ship and its valuable cargo. The ship was first salvaged in 1981. Here a few hundred bottles were pulled from the bottom of the sea together with a treasure consisting of several thousand gold and silver coins. However, most of the bottles were broken or had perished in other ways. Only a few of the bottles were intact and with their original content, such as the bottle that is now up for auction.

The wine bottle is difficult to place in terms of vintage since bottles in the 1700s were not fitted with vintage labels. And even if they were, the label on this bottle would have been dissolved a long time ago after the approx. 250 years spent in a shipwreck at the bottom of the sea. Wine expert Henrik Christensen explains that for this reason it is difficult to say anything specific about the contents of the bottle: "The bottle is of the “onion” type, which was typical for the period from the late 1600s to the middle of 1700s, and it was used for all sorts of wine. So, the bottle type does not tell us much about anything except the age," says Henrik and continues:" But what we can say for certain is that the Netherlands had some trade with wine from the German part of the Rhine. The Netherlands also had trade routes that ran across the Pyrenees down to Portugal and Spain, so the likelihood that it may be a port or Madeira is present."

Henrik Christensen also says that the wine is as authentic as a wine of this age can be – with its original content and cork intact. "To top it all off, the bottle is wrapped in a beautiful layer of mother of pearl after the 250 years at the bottom of the sea." Most of the bottles from the "Vliegend Hert" are currently owned by museums and can, for instance, be viewed at the maritime museum in Vlissingen in the Netherlands.

VIEW THE MOVIE WITH HENRIK CHRISTENSEN AND THE RARE WINE

You can see the historic bottle of wine at Bruun Rasmussen Auctioneers, Baltikavej 10 in Copenhagen's Nordhavn. The online auction ends on Sunday 18 March at 8 pm. 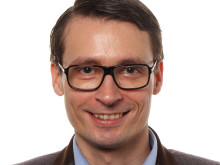 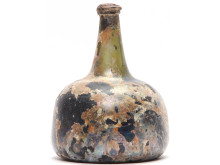 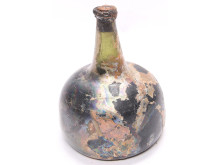 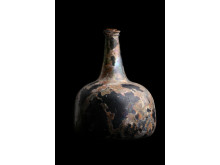 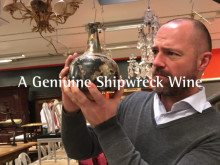 See the shipwreck wine and listen to our wine expert Henrik Christensen tell more about the rare wine bottle and its backstory.