A special sapphire and diamond ring from Tiffany & Co. surprised both specialists and guests at Bruun Rasmussen’s Live Auction in Copenhagen Thursday evening.

"We are delighted and surprised over the magnificent hammer price. There has been a massive international interest concerning the ring, and we had bidders from all over the world joining our auction – both jewellery houses, affluent customers and collectors. The ring contains an unusually large sapphire in a very rare colour, and together with the ring’s unique story this resulted in the surprising price,” says Katrin Mikkelsen Sørensen, Head of International Jewellery at Bruun Rasmussen.

The unique background story reveals that it was the engagement ring of none other than Edith Pulitzer (1886-1975). Edith was the daughter of the Hungarian American journalist and newspaper publisher Joseph Pulitzer, who bequeathed his fortune to Colombia University in 1917. Part of the fortune also went to establishing the Pulitzer prize in 1917. The offered ring has been in the family’s ownership since Edith Pulitzer’s death in 1975.

Tiffany & Co. is one of the largest jewellers in the world, and over the years they have created many international jewellery trends. You shouldn’t overlook the value of films in regards to establishing this fame for the brand. In the American classic “Breakfast at Tiffany’s” from 1961 with Audrey Hepburn in the leading role as Holly Golightly, the store on Fifth Avenue constitutes a central backdrop to the plot, and since then numerous films have referenced the jeweller – including movies like James Bond’s “Diamonds Are Forever” (1971), “Sleepless in Seattle” (1993) and TV-shows such as “Sex and the City” (1998-2004) .

The impressive ring was not the only lot to surprise with a sky-high hammer price. At the same auction, Bruun Rasmussen could present a collection of vintage jewellery from Van Cleef & Arpels. The jewellery has been owned by a Noble House in Europa – so only one’s imagination sets the limits on which important people might have worn them in the past. The fantastic collection consisted of six lots with a combined hammer price of DKK 1,928,000 (EUR 335,400 / USD 367,800 including buyer’s premium).

"The collection is completely unique, and there has been an immense interest in the lots. Jewellery items from Van Cleef & Arpels are among the most exclusive of the jewellery world – it’s exclusivity in its purest form. The great hammer price shows that bidders today are very quality conscious and zero in on unique jewellery pieces with unique background stories,” says Katrin Mikkelsen Sørensen.

The collection’s highest sale came with a sapphire and diamond brooch in platinum with a hammer price of EUR 97,500 / USD 107,000 (including buyer’s premium). The brooch is set with no less than 25.40 ct. of diamonds of the finest quality and 31.90 ct. of the incredibly rare, natural and untreated sapphires.

The biggest surprise of the collection was a bracelet made of sapphires, diamonds and emeralds with a lock in the shape of a lion’s head. With a hammer price of EUR 48,700 / USD 53,400 (including buyer’s premium) against an estimate of DKK 25,000-30,000 the bracelet was sold for 1.120% of its estimated price. 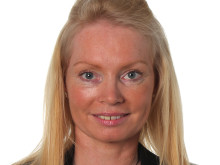 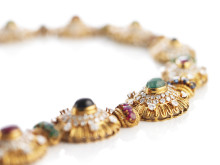 A collection of exquisite jewellery from one of the world’s most highly regarded jewellers has found its way to this year’s first Live Auction in Copenhagen on 27 February. 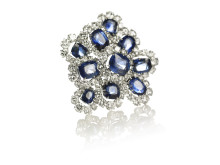 Van Cleef & Arpels: A sapphire and diamond brooch set with cushion-cut sapphires and brilliant-cut diamonds, mounted in platinum and ... 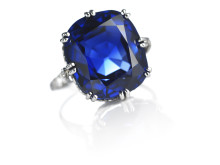 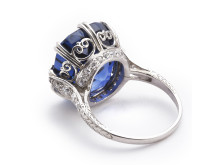 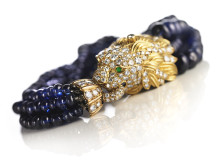 Van Cleef & Arpels: A sapphire and diamond bracelet in the shape of a lion's head with sapphire beads, emeralds and diamonds, mounted...