Port of Gothenburg freight volumes are continuing to rise in several segments. During the first half of 2020, containerised units rose by 4% and energy products by 22%. This despite the current Covid-19 pandemic, and while virtually all larger ports in Europe and the world show negative results.

“Working in partnership with our terminal operators we have succeeded in keeping the port open and fully operational all year. This has been a key factor behind the increase in volumes in a number of segments and it is a general reflection of our perseverance and the robustness of our freight handling system during the current crisis,” said Elvir Dzanic, Gothenburg Port Authority chief executive.

Containers
Container volumes – the number of containers expressed as TEUs – at the Port of Gothenburg rose in January-June by 4% to 401,000. In contrast, other ports are reporting a downturn. The 10 largest container ports in Europe and the world reported a fall of 9% and 4% respectively during the same period.

Despite the pandemic, the Port of Gothenburg container terminal has been working at full capacity and with no cancelled calls by mainline vessels, which are responsible for the vital direct weekly services between Gothenburg and Asia. Feeder traffic* frequency has also been maintained and with an increase in the size of the feeder vessels during the period.

Containerised goods to and from the port by rail continue to increase. Volumes during the first half of the year were up 2% from what were already record levels.

“On the whole, the container segment has proved to be extremely resilient and the trend during the year shows that the Port of Gothenburg is continuing to acquire a greater share of the market,” said Elvir Dzanic.

Energy products
Energy products rose by 22% to 11.8 million tonnes between January and June. This can be attributed in part to widespread turbulence on the world market and the low price of oil in the fall-out from the Covid-19 pandemic. There has been a surge in demand for fuel storage at the Port of Gothenburg as a result. Planned maintenance stoppages during the corresponding period in 2019 had a slight impact on volumes at the time.

Roro** and vehicles
The number of ro-ro units fell by 13% to 252,000. The major downturn in April-May was followed by clear signs of recovery in June.

Vehicle volumes at the Port of Gothenburg decreased by 23% to 103,000. The vehicle segment has been hit particularly hard by reduced throughflow in the wake of the pandemic and the resulting slump in vehicle sales. The fall in the number of vehicles handled culminated in April-May. As in the ro-ro segment, which was also affected significantly by the current situation in the automotive industry, volumes in June increased.

Cruise and ferry segment
The cruise season in Europe came to a virtual standstill due to the pandemic and all calls to Gothenburg during the first half of the year were cancelled.

The number of ferry passengers fell by 56% to 310,000, although an upturn in interest in travel by ferry was noted towards the end of June.

* Feeder traffic involves the use of smaller vessels to ports where the cargo is then loaded onto larger vessels.

** Ro-ro stands for roll-on/roll-off and refers to trailers and other wheeled cargo carried on vessels operating within and outside Europe. 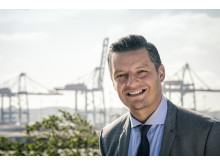 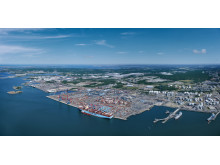