The Port of Gothenburg has embarked on a major project that will involve replanting 1.7 hectares of vital eelgrass meadows that will disappear with the building of a new terminal as part of the Port’s expansion programme.

The largest port in Scandinavia is growing. A new ro-ro and container terminal is due to be built beside the present ro-ro terminal at Arendal - the largest planned expansion initiative at the Port of Gothenburg since the 1970s.

On the site of the new terminal there are currently 1.7 hectares of eelgrass*. To ensure eelgrass volumes are maintained in the Gothenburg Archipelago, the Port of Gothenburg will plant the same amount of eelgrass at another location in the vicinity.

Edvard Molitor, Environmental Manager at Gothenburg Port Authority, emphasises the importance of eelgrass meadows to the ecosystem and as a spawning ground for several species of fish. “When we build the new terminal, the eelgrass meadows at the site will disappear. To compensate for this loss, we will replant the same volume of eelgrass that disappears from the bay at Arendal.”

Unfortunately, planting eelgrass is no easy task. The method that produces the best result is both expensive and time-consuming. One shoot at a time is planted by hand. It may be slow, but it is the approach research has shown works best.

The replanting of eelgrass will be carried out in collaboration with marine biologist Sandra Andersson at Marine Monitoring. The Swedish Agency for Marine and Water Management and the County Administrative Board are also involved in the project. The investment is part of the environmental compensation commitment that the Port of Gothenburg agreed to when it was granted an environmental permit to expand the port.

“As always when we build something new, we compensate for the intrusions we cause. If we are to retain our competitiveness and meet future growth targets, the port needs to expand, but it must do so sustainably,” concluded Edvard Molitor.

* What is eelgrass?
Eelgrass meadows act as protection and as a spawning ground for several fish species. Eelgrass also helps to improve water quality and safeguards beaches against erosion. Eutrophication, overfishing and exploitation in coastal areas have resulted in the disappearance of many eelgrass meadows. 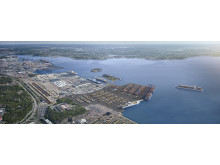