Freight volumes at the Port of Gothenburg rose by almost three million tonnes in 2016 - up from 38.2 million tonnes in 2015 to 40.9 million tonnes last year. Car exports-imports and energy products enjoyed a particularly successful year with rises of 15 and 12 per cent respectively. Container volumes were down three per cent. The freight figures for 2016 have just been released.

Last year, the volume of freight handled at the Port of Gothenburg rose by seven per cent to 40.9 million tonnes, compared to 38.2 million tonnes in 2015.

“The upturn can be attributed largely to the rise in the number of cars shipped via the port but also to higher volumes at the Energy Port and a good rate of activity at our ro-ro terminals,” said Magnus Kårestedt, Gothenburg Port Authority chief executive.

Good year for cars
The Port of Gothenburg is the largest automotive export point in Sweden. There are also substantial imports, including Mazda, Nissan and Renault. In 2016, 246,000 cars passed through the port - up 15 per cent on the year before and the highest figure recorded since the financial crisis of 2008. A significant factor in the surge in car movements is Volvo’s continued sales success abroad.

Container flows down
Some 90 per cent of Swedish foreign trade takes place by sea. In the case of trade with countries outside Europe, container vessels are the most common mode of transport. Some 798,000 containers were handled at the Port of Gothenburg in 2016, a year-on-year fall of three per cent.

Magnus Kårestedt explained: “The container terminal has had a challenging year with the labour dispute with the Dockworkers’ Union, which has escalated and resulted in major disruptions. This is highly unfortunate and it has affected the whole of Swedish industry. We are, however, working on the assumption that the parties will find solutions that will prove sustainable in the long term.”

Trailerised freight increases
Ro-ro freight* increased during the year. A total of 538,000 ro-ro units were shipped, up two per cent on 2015.

Energy products in full flow
Gothenburg has the largest open access energy port in the Nordic region and it handles half of Sweden’s crude oil imports. The Energy Port produces petrol, diesel, asphalt and a range of other products. The proportion of renewables is growing.

A total of 23.7 million tonnes of oil and energy products were handled in 2016, up 12 per cent on the year before and a new record high for the Port of Gothenburg.

“We have never handled volumes of this magnitude before. The difference compared to the previous year is largely the result of an increase in storage and distribution flows. We can also see a clear increase in biocomponents**, which are refined and mixed into the fuels,” said Magnus Kårestedt.

Fall in passenger traffic
The number of passengers passing through the Port of Gothenburg was down two per cent on 2016 at 1,708,000. There was also a fall in the number of calls by cruise ships - from 50 in 2015 to 34 last year. The trend now appears to have been reversed with 43 ships scheduled to call during the 2017 season.

* Ro-ro stands for roll-on/roll-off and refers to trailers and other wheeled cargo carried on ships that operate in regular liner traffic within Europe. 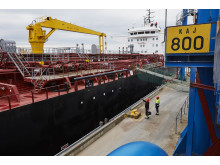 Tanker in the Energy Port... 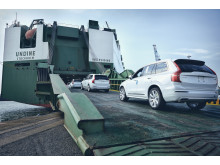 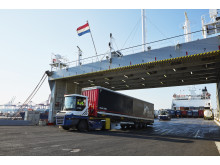