Munich, February 2019: The private equity (PE) industry is starting 2019 with modest expectations, the optimism of previous years have largely evaporated. For the first time in many years, almost half (48%) of the professionals polled expect a drop in the number of M&A transactions with PE involvement, while just one third (31%) anticipate continued growth. Concerns around geopolitical risks and economic uncertainties are the main drivers behind the pessimistic development, according to the recently published European Private Equity Outlook 2019, Roland Berger's annual survey of PE experts across Europe (Download study here).

"For years, the optimistic view dominated our poll of European PE experts, but this year the positive outlook is 20 percentage points down on 2018," says Sascha Haghani, Managing Partner Germany and Head of Restructuring & Corporate Finance at Roland Berger. "There are clear signs of a potential economic slowdown here. And the geopolitical situation is dampening the market sentiment, too, given the uncertainty surrounding the trade wars and the ongoing Brexit negotiations."

That said, there are significant regional differences: In Spain, Portugal and Scandinavia, as well as Germany/Austria/Switzerland, the PE experts anticipate a positive market development for 2019, whereas the UK's Brexit headache lands the country in the last place. Expectations are also down for Italy, Greece and France owing to the flagging economy there.

No change in the attractive industries

There has been no movement in the most attractive sectors for PE investment: The industries considered most likely to see a high number of M&A transactions are once again pharma & healthcare (72%), technology & media (70%) and business services & logistics (65%). The least attractive market for PE involvement is construction, scoring just 7 percent, 11 percentage points down on last year. The size of acquisition targets also remains largely the same: "Companies in the mid/small-cap segment are considered to be the most promising targets," explains Christof Huth, Head of the Practice Investor Support DACH at Roland Berger. "Few experts expect many big deals in the coming year." 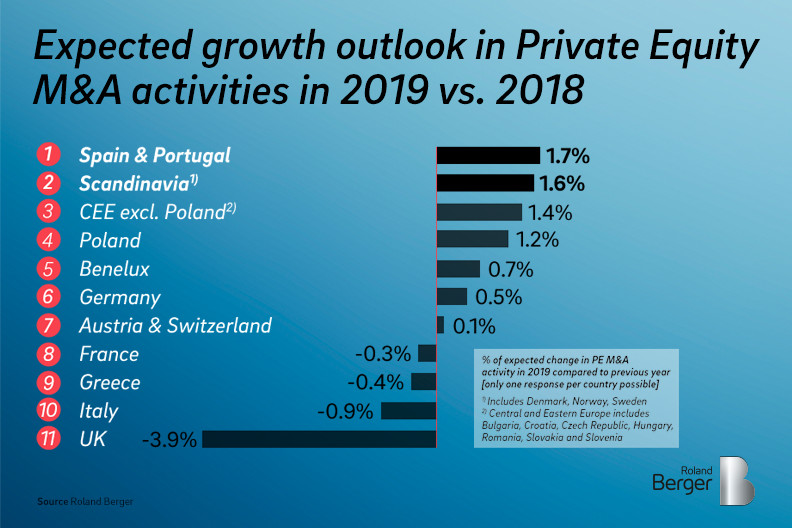 A key focus for PE professionals in 2019 lies on developing portfolio companies: 32 percent of those polled (10 percent more than in 2018) cite this as the top priority. "Given all the uncertainty around today, making their portfolio 'weatherproof' in the face of economic changes is more of a focus for professionals now," says Roland Berger Partner Sven Kleindienst. "PE firms are also keen to make add-on acquisitions and increase their capabilities in digitalization/Industry 4.0 to improve their portfolio and create value in 2019."

The vast majority of PE experts polled consider valuation multiples to be overvalued, so they expect them to decrease slightly. "We are still in a low-interest rate environment but we could soon find the sheer amount of uncertainty present in the market today reflected in valuation multiples," says Roland Berger PE expert Thorsten Groth.

One big issue that has recently faced many industries, not just private equity, is the influx of Chinese investors trying to get a slice of the European market. The Roland Berger study indicates that the situation on the M&A market may well be normalizing: Whereas 42 percent of those polled in 2018 expected competition from strategic or financial investors from China to increase further, only 28 percent of survey respondents expressed that view this year.

"Most professionals think that competition from China has found its level now," says Christof Huth. "On the one hand, we are seeing Chinese investors becoming increasingly selective and no longer attacking every industry at once, and on the other hand Europe's governments have lately put up a number of barriers themselves."

Study Download
Companies see sustainability as an increasingly relevant criterion for their portfolio management 70 percent of experts are preparing for an economic downturn in Europe PE professionals consider the markets in Scandinavia, Italy and Greece to have the most promising outlook in 2020

Munich, February 2020: The issue of environmental sustainability is having an i

Roland Berger, founded in 1967, is the only leading global consultancy with German heritage and of European origin. With 2,400 employees working in 34 countries, we have successful operations in all major international markets. Our 50 offices are located in the key global business hubs.
Roland Berger advises major international industry and service companies as well as public institutions. Our services cover the entire range of management consulting from strategic advice to successful implementation: e.g. new leadership and business models; innovative processes and services; M&A, private equity and restructuring; and management support on large infrastructure projects.

Our firm is owned solely by a group of 250 Partners. We share the conviction that the firm's independence provides the basis for unbiased advice to our clients.

All employees at Roland Berger are committed to our three core values
Entrepreneurship – We follow an entrepreneurial approach and provide creative and pragmatic solutions.
Excellence – We achieve excellent results and develop global best practices to ensure measurable and sustainable success.
Empathy – We are insightful and responsible advisors and we contribute to the greater good.

At Roland Berger, we combine sound analyses with creative strategies that generate real and sustainable value for the client. We develop and consolidate our expertise in global Competence Centers that focus on specific industries and functional issues. We handpick interdisciplinary teams from these Competence Centers to develop the best solutions.