Las Vegas, January 2020 - Shortcut Labs releases the new Software Development kits for Flic 2, making it possible to implement native support into any iOS and Android App on the market.

Kickstarter Success “Flic 2” shipped to backers with great reviews, gets released to retail

Stockholm, Sweden - Shortcut Labs, creators of Flic Smart Buttons, released the second generation of their popular smart button suit on Kickstarter last summer, and the campaign was a great success. Flic 2 is now shipped out and has received overwhelming praise from backers. Today, Shortcut Labs release two packages for retail.

Flic was the world's first Smart Button when released in 2014. Loved for its simplicity, over half a million Flic buttons have shipped. The second generation starts sending today, to over 6000 Kickstarter backers. 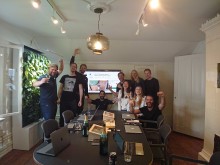 This is the third time Shortcut Labs crowdfunds a product launch and just as many times they’ve delivered. This time the company reached its goal of $50 000 USD within 30 minutes from the start.

The rise of the Buttons

Five things we learned at CES 2019

Flic and GitHub partner up to make life easier for programmers

Yesterday at GitHub Universe, Flic was featured on stage as part of a demonstration meant to showcase the flexibility of GitHub Actions which was announced on Day 1 of the GitHub Universe conference. Flic is a great example of an IOT solution that helps us extend our platform beyond just software.” Says Sam Lambert, Head of Platform at GitHub. 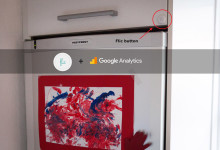 Track your soda habits with Flic and Google Analytics

We’ve all been there - participating in a meeting and zoning out, staring at the smartphone hoping the meeting will end. The conference hotel Clarion Hotel ®, which is part of Nordic Choice Hotels, is now launching a solution called the “Save Me Button” that lets you take control of boring meetings.