No Yes
Together with current and former ESVAGT employees, Nichlas Holm, ordinary seaman on the ’Esvagt Faraday’, helps sailors in need in his spare time.

Safety training is an important part of daily life for ESVAGT colleagues, and the safe mindset follows when at home. Nichlas Holm, 19 year-old from Ærø and ordinary seaman on the ’Esvagt Faraday’, is one of more current and former ESVAGT colleagues who are active with the vessel Erria Rescue in the volunteer-based Ærø Sea Rescue Association (Ærø Søredningsforening) in their spare time. And there’s lots to do, he says:

‘The area is characterised by low waters and numerous recreational sailors, so we assist many grounded crafts and sailors with engine breakdowns’, says Nichlas Holm.

A windy night not long ago, he assisted a craft who experienced both – the engine had broken down, and the sailboat grounded outside the Port of Lyø.

‘By the time we found them, the ship was on its side and hitting the seabed. There were two men on board – one of whom was an elderly man who was fatigued’, recalls Nichlas Holm.

Wearing an immersion suit and equipped with a torch and a line from the Erria Rescue, Nichlas Holm jumped into the water and waded and swam to the grounded ship where the the line got secured.

‘The two on board had been there for 2-3 hours in 12 metres per second, so they were quite nervous and exhausted. They unfortunately had to let go of the line because of the wind, and I had to get into the water once more to get a new line from the vessel. Once I got that one tightened to the ship, it snapped, and I had to go back one more time. Every time I jumped in, the sailors said I was rather nuts but – I do have my training and good competent colleagues back on board the vessel, so I was fully comfortable with the situation‘, says Nichlas Holm.

The third line stayed on, and the sailboat was manoeuvred nicely and towed to the Port of Lyø, where the sailors got warm again and were part of the rescue crew’s debrief to talk the whole process through, including what could be improved next time. 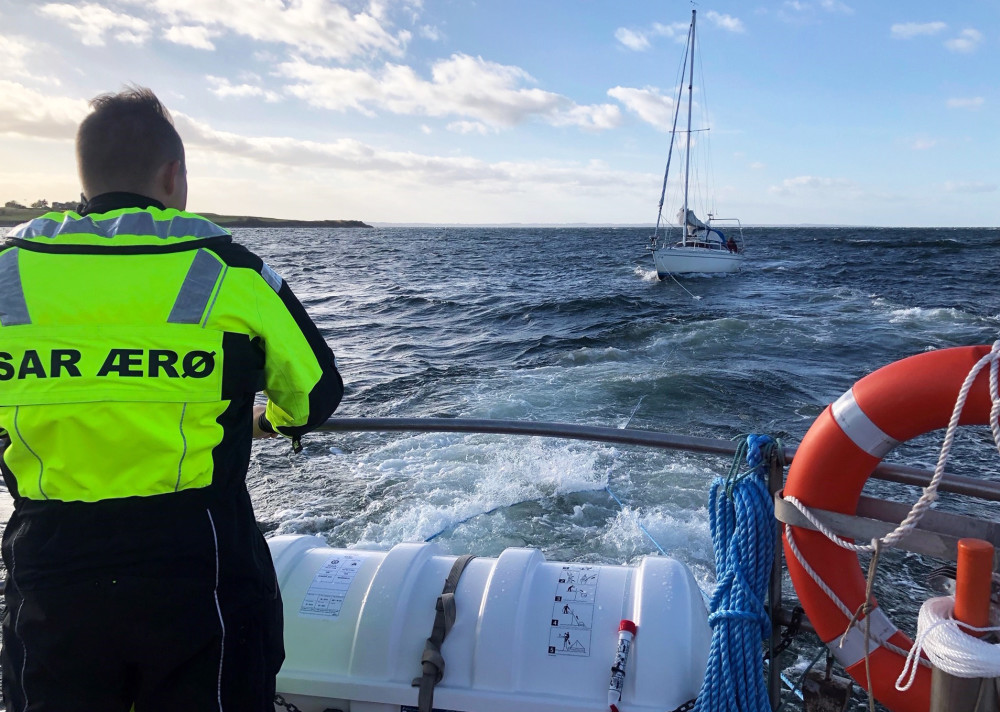 ‘It’s nice to have an expertise that makes a difference. We performed a tool box talk and a risk assessment just like we’ve learned in ESVAGT, and I reacted instinctively and was serene all along’, says Nichlas Holm.

‘They really know their metier’

Erik Sørensen from the Ærø Sea Rescue Association (Ærø Søredningsforening) is happy to have Nichlas and other ESVAGT people to count on in these critical situations:

‘We are a mixed bunch after all who have different competences and just have this as a pastime in our spare time. Thankfully, we also have volunteers from ESVAGT who know their metier to their fingertips and are super well trained in sailing boats and vessels and make a difference in a critical situation’, says Erik Sørensen.

After retirement, collegial bond lives on in ESVAGT Senior Club.

The ‘Esvagt Bravo’ has been a turning point in the development of ESVAGT’s competences and safety culture. Earlier this year, the vessel signed off after 39 years of loyal service.

ESVAGT will meet the consequences of the decreasing energy prices and Covid-19 through streamlining and pay reduction, and at the same time ensure that the shipping company can continue to support the vital infrastructural energy production.

ESVAGT colleagues spend their spare time together making the South Funen Archipelago a safer place to be. 27 rescue operations in 5 months.