No Yes
Victoria, son Timothy and Andrew. 'Defrauded' for £58,000 in Malta, and by suspect timeshare company acting as intermediaries for Barclays Partner Finance

Surrey couple 'railroaded' into £58,000 of loans to buy a timeshare in Malta by a salesman who was also acting as an (unregulated) loan officer for Barclay´s Partner Finance.

Surrey couple John Dilcock and Victoria Ibrahimova were blown away with what they had seen.  Salesman Jeff Crudginton, had 4 hours showing them around the luxurious Golden Sands, a luxury timeshare development sold by now defunct timeshare company Azure Resorts Ltd.  He had used slick sales techniques to entice the couple into making an expensive decision to join the as new members.

"£58,000 was the price," adds Victoria, 46 a procurement manager, also in Oil & Gas.  "Looking back on it, we never would have spent such a lot of money if we had been allowed to go away and think about it.

"A senior salesman called Alex was called by Jeff, and it was obviously his job to close the deal.  Between them they told us a lot of things that weren´t true, and in doing so they defrauded us out of a significant amount of money.  The main reason we thought they couldn´t be lying is because of what they told us was their connection to Barclays.

"For example, Jeff and Alex told us that we swap our week for a cruise instead of coming to stay at Golden sands whenever we liked.  When we checked later with RCI, the exchange company who was supposed to arrange the cruise, it turned out that just wasn´t true.  All we would get, if we gave up our expensive week at Golden Sands, would be a £75 voucher towards a cruise.  Almost nothing at all."

The couple were also told that if they ever didn´t want to come on holiday, Azure would rent their timeshare apartment out for them for more than the price of their annual maintenance fee, meaning that there would never be a financial burden if they couldn´t make it abroad. 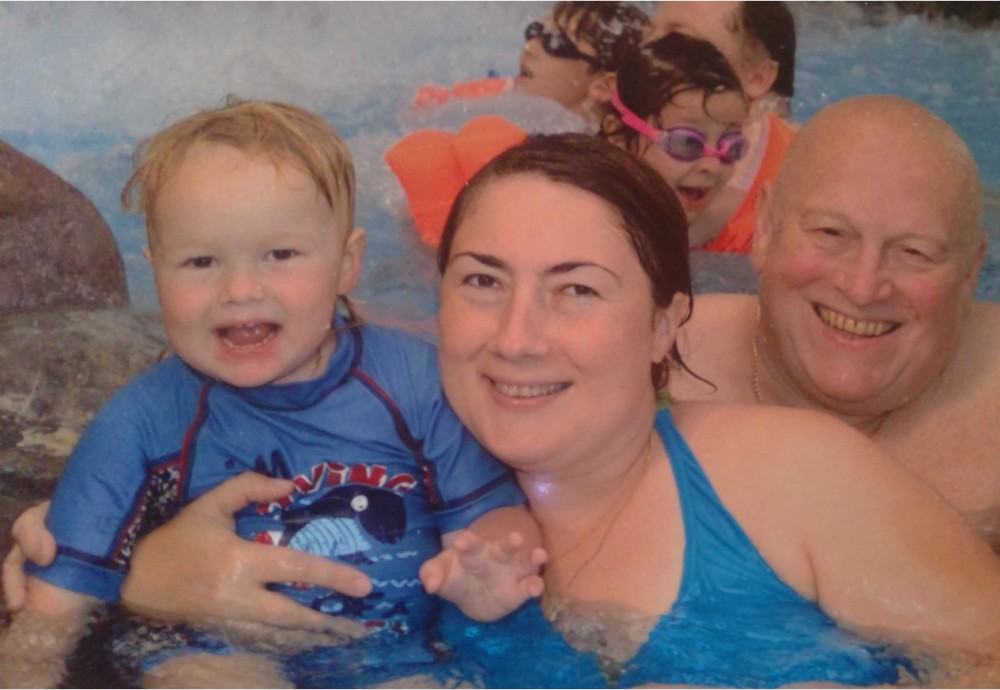 Fun in the pool.  Andrew, Victoria and son Timothy before the sales presentation

"Crucially for us, Jeff and Alex said the purchase was an investment," continues Andrew, "and that it was likely to increase in value by around 10% a year.  It sounded like a great deal, but we were in a foreign country and told them we needed to think about it.  £58,000 is a huge amount of money.  We didn't know if we could afford it.

"Jeff told us that he could get us a loan through Barclays, and that the FCA had licensed Azure Resorts Ltd as a credit intermediary.  Jeff claimed that Barclays would never allow this without checking every detail of the business, and that made sense to us.  Barclays were the pillar of respectability as far as we were concerned."

"It had been a long day," adds Victoria. "Our son, Timothy had been in his chair for hours.  We loved the complex, it was an investment and going to make us more money annually than the cost of the loan, especially when we refinanced our mortgage back at home.  Jeff told us we could only join on the day, or not at all.  And because it was approved by Barclays, we  felt protected enough to sign up."

Later, after finding that many of the points they had been sold on were not true, they tried, along with over 160 other clients, to get their money back with the help of law firm M1 Legal

"There were several things that don´t feel right, looking back at the sales presentation," says Andrew.  "It´s surely a conflict of interests that the salesman was also the allegedly licensed credit broker.  He gets commission for the sale so his motivation is to to drive through the loan but on the other hand he is supposed to be responsible for making sure the applicants are not overreaching themselves.

"He asked us very few questions, and advised us to split the loan into two, £28,000 for Victoria and £30,000 for me.  The loan was approved in minutes.  It just didn't feel like the kind of vetting that goes on from a bank back at home where they go into every detail of your finances.  The trouble is that they said a lot of things verbally that were not in the contract.  Again Barclays´ involvement made us feel secure enough to trust the Azure salesmen."

Andrew and Victoria believe that the pressure to sign on the day, coupled with Jeff and Alex being the people in charge of the loan process left them vulnerable to fraud by the Azure salesmen.

"Normally with a loan it takes a long time to approve," agrees Victoria.  "You have to show everything, even council tax receipts.  Nothing is rushed.  This was different.  We fell victim to a scam, and the fact that Barclays apparently trusted the Azure company was a big factor in our decision."

The £58,000 loan was refinanced by the couple onto their mortgage and is now paid off, but for a while it was a serious worry.

"I got laid off shortly afterwards," says Andrew, "and I spent 18 months without work.  This amount of lost money could have devastated our retirement plans."

Daniel Keating of the Timeshare Consumer Association, representing Andrew and Victoria in the media adds that "at least 1482 membership loans were arranged up by Azure using Barclays Partner Finance and the story is being covered by the Financial Times  Whatever the final result, the victims feel as though normal lending protections were not taken seriously by the Azure sales people who were motivated by earning commission.  As a consumer organisation the TCA believes that Barclays should have been more vigilant in dealing with Azure, a company with a poor reputation in an industry known for pressure sales."

Adriana Stoyanova, the senior M1 Legal lawyer representing Azure clients with the FCA and Barclays Partner Finance, released the following statement:  "We believe there was insufficient oversight on the loan process from Barclays.  The FCA did actually license a company called Azure Resorts Ltd, who are incorporated in the British Virgin Islands to act as credit intermediaries.

"However that BVI company had no employees.  It seems that the people handling the loans were actually working for a different company called Azure Services Ltd, incorporated in Malta.  This second company was NOT licensed, at the time, to handle loans for the bank.  Therefore the people acting as intermediaries were not licensed or qualified in any way.

"Even if the FCA had actually licensed the company handing the loans, Barclays had a duty of oversight, which we feel they failed to carry out."

There are over £48 million in loans about to be investigated by an independent assessor.  The TCA will publish updates as we get them.

Another timeshare juggernaut throws in the towel

Timeshare members furious at being charged full fees despite the resorts being closed to holidaymakers.

RDO and KwikChex acting on behalf of the timeshare industry

Seasons Holidays pushing out elderly timeshare members to cash in on demand for UK holidays?

Alert: Timeshare owners warned, "get a copy of your contract while you can"

Europeans considering buying a timeshare in America, read this before you commit.

Anfi Group desperate to upgrade members to new contracts. Is this an attempts to avoid tens of millions of pounds worth of compensation claims against the timeshare giant?

Is there a future for the timeshare industry?

Could it be that like Cretaceous leviathans blinking unwittingly at a brightening second sun, the timeshare giants are finally facing extinction? Or will they evolve into something new? We asked three experts what they believe the future holds for the tourist industry´s wild cards.

Sarah Waddington Solicitors claim to help timeshare owners. But do they?

Sarah Waddington Solicitors. Claim to be good at helping timeshare victims seek compensation. But how is their record on timeshare claims?

Timeshare Consumer Association website getting a makeover. Fresh new look, but nothing else changes.

Timeshare resales scams rearing their ugly heads yet again, both in Europe and the USA.