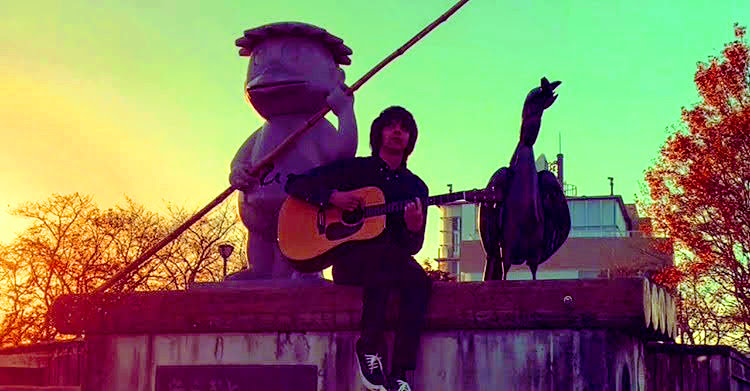 Chris Jack has been a key figure in the global 60s underground for two decades now, with the ultra-fuzz rave ups of his group The Routes becoming the stuff of legend. A Londoner in Japan who has transported himself to the United States, this perpetual wanderer recently halted his chase for volume, allowing a placid calm and mellow self-doubt to linger across his beguiling new solo album ‘Miles To Go’.

A slowly piercing series of meditative cycles, ‘Miles To Go’ presents 10 tracks that channel Galaxie 500’s spider-like minimalism, the warmth of early Low, or even the twilight introspection of the Velvet Underground’s bummed out third album. It’s all fuelled by this desire to communicate, something that allows the opening title track to truly get under your skin.

‘Half A Man’ is a ruminative vignette, while the Autumnal tones that colour ‘Close The Door’ feel positively seasonal. ‘Train Of Thought’ is a wondrous mid-LP sojourn, while ‘The Way It Has To Be’ finds Chris Jack facing up to unwanted elements in his life.

A record about growth and self-knowledge, ‘Miles To Go’ is the sound of the UK born songwriter finally looking in the mirror. Shorn of vintage tropes, it buzzes with minimalist invention, with songs such as ‘Thought’ and ‘Elephant’ betraying a unique kind of delicacy.

Closing with the caustic ‘What’s New’, the album seems to finally escape its ennui, bursting out of repetitive cycles to reclaim old ground with fresh knowledge. It’s a beautiful experience, the inversion of those freakbeat elements to locate something personal, a sense of wisdom hard-worn. Chiming guitars lowered to sub-zero temperatures, ‘Miles To Go’ is Chris Jack at his most allusive, yet curiously also his most direct. One to seek out.

Mesmerised is the eighth album from Chris Jack with his rotating band, The Routes, and will be released next month on Action Weekend Records and Bickerton Records

Brimming with urban despair but defiant in the face of it, the cut is perfect territory for The Versions to show off their own brand of rock and roll attitude.

Notorious for these untamed exhibitions Killer Kinn sate a deep-desire for reprisal, retribution, revenge, and will cut the words from your motor mouth and brandish a blues that will make you want to bounce to the beat in your black boots.

The group have just released their third studio album which furthers their expansion of sci-fi future rock n roll with many elements combined to create a storm of garagey post-punk sleaze-filled fun. With songs about dystopian visions & celebratory situations Oh! Gunquit, coupled with Tina's fervid vocals, compel you to get loose and slay the day'

Apocalypse be damned!! This insanity kicks off tomorrow night in Kortrijk, Belgium and Sin City will be chasing the party across Europe for the next few weeks!!

Over the last few years, THE SCHIZOPHONICS have built up a formidable reputation around the world as an explosive live act and have just announced a 14 date US tour which kicks off in September 2021

A year ago today, Neus Ruiz unveiled and released her heart-melting debut single, 'The Right One'.

'Somewhere Safe’ is smothered in agitation; utilising screaming vocals and a growling synthbass sequence, it provides a dramatic setting for another album highlight.

“Lyrically, the album builds on eternal philosophical questions of life and death in the dystopian post-apocalyptic setting,”