Increased demand for responsibly sourced and traceable seafood is the biggest trend in a fresh study on worldwide seafood consumption. The annual study, consisting of over 25,000 respondents around 25 countries across the globe, show that safe and sustainable is the fastest growing reason for purchasing seafood across all countries.

The annual study, which is performed by TNS Kantar on behalf of the Norwegian Seafood Council, is the largest consumer seafood study in the world, due to the amount of data collected. The study asked respondents about their reasons for buying seafood and what impacts their purchasing decisions. Whereas the biggest reasons are taste and health, an increasing number of people across all markets say they are choosing seafood because it is a safe and sustainable option.

Across the 16 countries that have been included in the survey from 2018, 17 percent say they choose seafood because it is safe and sustainable, compared to 13 percent in 2012. This is an increase of over 30 percent in 6 years.

The increase is prevalent across the age groups 18-34 years and 35-49. It is particularly visible among the youngest age group, with an increase of nearly 60 percent in 6 years, from 12 percent in 2012 to 19 percent in 2018. This result is backing the assumptions that younger consumers are driving the shift to more conscious consumption.

From 2015 to 2018, 18 countries have participated annually in the study. In 17 out of the 18 markets, food safety and sustainability as a factor for choosing seafood has increased in the past 3 years, showing that sustainable and responsible food production is starting to have real impact on purchasing behaviours across the world.

- These findings prove that food safety and sustainability is not something food producers should take lightly. Consumers increasingly demand to know where their food comes from and that it is produced in the most sustainable manner possible. We are moving away from responsible production being a nice to have, and into a world where it is a necessity to be able to prove and document it, says Renate Larsen, the Norwegian Seafood Council's CEO.

- The study finds that the ones that lists food safety and sustainability as an important reason for choosing seafood, see Norway as a leading seafood nation. In a world where country of origin is growing in importance to consumers, this proves the positive effect of our continued focus on telling the story about Seafood from Norway as a sustainable choice, and our seafood companies continuous efforts to developing the most sustainable and technologically advanced methods for harvesting and producing seafood, Larsen adds.

Salmon from aquaculture, where Norway is the world’s biggest player, is one of the most resource efficient forms of protein production in the world, according to a recent study by the Global Salmon Initiative (GSI). According to the report salmon production has significantly lower carbon footprint and feed conversion ratio than proteins like chicken, pork and beef production.

Norwegian aquaculture companies hold 4 out of the top 10 spots in the 2019 Coller FAIRR Protein Index, ranking 60 of the world’s largest publicly-listed protein producers on how they perform on sustainability.

Managed responsibly, the oceans can provide over six times more food than it does today, a new report shows.

If people swapped even a small proportion of their meat for seafood in their daily diet, an area twice the size of India could be spared, a new study by Norwegian and American scientists has found. 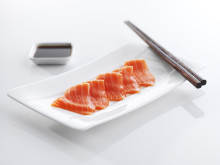 Only half of us eat recommended amounts of seafood, new study shows

A recent study by the NSC uncovers that seafood consumption is far below recommended amounts. The study, which is the largest seafood consumer study in the world with more than 25,000 respondents across 25 markets, found that only 51 percent of people reported eating seafood two or more times a week.